The Weight of London

Every time I land at Heathrow, I can feel a difference in the air. With many countries, the swirl of foreign language makes it obvious that I am traveling, that I have left the United States and entered the land of the other. But this could still be New York, though perhaps a cleaner one. Sure, I receive a strange-looking currency out of an ATM instead of dollar bills, but I have no problem reading the signs for the Underground, no problem telling the taxicab driver where to go. It was just like America, except smaller and with better public transportation. Why then, did it feel so different?

The first thing I notice this visit is that tea becomes my blood as it never can be in America. The hotpot always seems ready at friends’ flats, whether they are of Indian, Chinese, or Irish extraction. "Tea?" is offered at every pause, at every corner café, and the tradition and ritual connect us with a billion British through the years. I try to think of a daily American custom that has lasted as long, fifty years even, and fail. Another day we had afternoon tea at Fortnum and Mason, pretending to be upper crusters. "Pass the scones, old sport," my friend tells me, quite seriously. But that day we drink tea at a simple tea house in Regent’s Park, and I have what is possibly the best cuppa of my life. I check the bag and find the Twinings label, a common tea brand in the U.S. "Twinings!" I exclaim to my friends. "This ain’t the Twinings we get!" I marvel at the attention to quality, to the importance of detail in daily life that seems missing at home.

From the Regent’s Park tea house, we walk out onto the wet green lawns and find the spot where the final scene of John Fowles’ The Magus takes place, where the main character and the reader are left wondering whether love will triumph. Suddenly, ten thousand novels, plays, and films open to my senses as I realize that London is English Literature, the birthing ground for story itself, for a million scenes of conflict and resolution. Down the road, in the Archive Room of the British Library, those stories line the walls – unbelievable documents that seem legendary: the only copy of Beowulf, the first folio of Shakespeare, the Magna Carta, Alice in Wonderland, Newton’s laws, Gandhi’s letters, and a thousand more, spinning my head in disbelief. Such a room does not exist in America, except in palest imitation, housing a few minor manuscripts, a paltry sum of historical record.

The city seemed like a thick tea bag full of the most venerable leaves as we waded into it again. Stopping at the British Museum, I find a hundred pieces from history class, things that make our heads swim in the deep well of time. Outside, in the streets, the march of history continues, from the primeval Tudor taverns to the iconic Big Ben. Here we stride through those stories in a way we could never do in a place like Hollywood, where the backdrops are fake and the on-site locations constantly changing. Here the ancient gates and smoky taverns live beside gleaming towers of modernity. Certainly a place like New York has at least begun to build its own mythology, with a hundred years of film and novel to lend it weight. But in ancient Londinium these moments can come to life all around you, in this dense, chewy center of English-speaking culture.

My friends and I take pictures with the electrified statue of Winston Churchill, on which no pigeon dares to perch, and duck into Westminster Abbey. As we make our way through the ancient halls, we find the tomb of Queen Elizabeth. Queen Elizabeth! That such a fabled person walked the earth and has an actual resting place seems beyond all expectation. We pay homage in Poets’ Corner, to the writers who built our common language and passions. And then, in the wide gallery of the Abbey, I find the grave of Charles Darwin, an apparent contradiction that only the British could cheerfully stomach, like a Monty Python skit come to life. It is like the pub a wry Britisher opened in an old temperance hall, like the celebration of Guy Fawkes’ Day with fireworks. Only a people with a seasoned, rich culture can see beyond the seemingly outrageous paradox to the calm, tea-blend of true history.

I stand a long time at the grave of Charles Darwin, amongst the murmur of tourists and the sound of echoing feet, knowing that some of my fellow English-speakers probably take this for granted, the solid weight of memory – their lives made denser than scones by narrative and details, in a way that most Americans will never know.


First published in Hackwriters: The International Writers Journal.
Posted by Eric D. Lehman at 11:50 AM No comments: 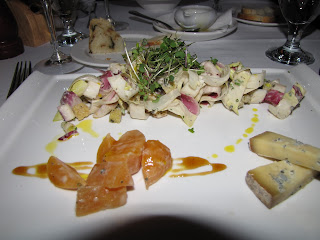 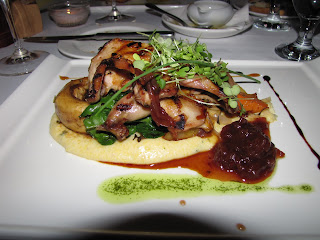 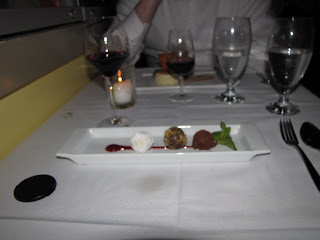 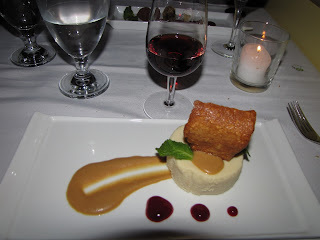 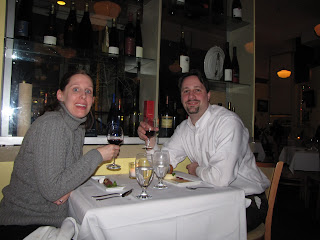 I really wish I remembered the name of this restaurant. If anyone of my Canadian friends has a clue, let me know! It was in the center city of Ottawa, east of Parliament and the concert hall. 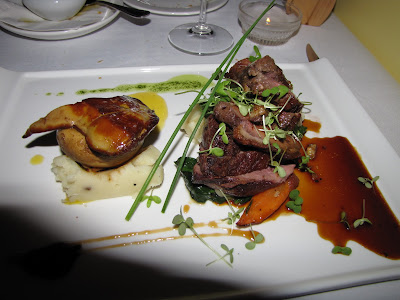 Kale and Sausage with Roasted Parsnips 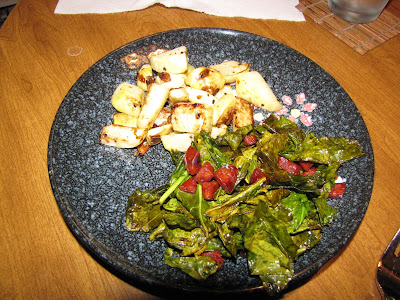 Kale and sausage with roasted parsnips. At least I think that's kale, looking at it a year later. Maybe swiss chard?
Posted by Eric D. Lehman at 11:22 AM 2 comments: 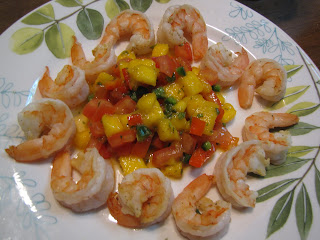 In honor of my wife's poem in Gastronomica, one of her recipes - a shrimp with homemade mango salsa that was just delightful.
Posted by Eric D. Lehman at 4:06 PM No comments: 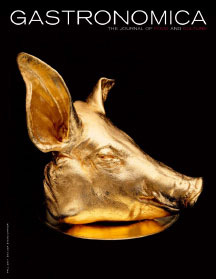 Everyone should run out and get a copy of Winter 2011's Gastronomica, which features a poem by my wife, Amy Nawrocki, called "Jamaican Farewell." It's also a really great journal, focusing on food and culture, and with some of the greatest food photography you'll find anywhere.
Posted by Eric D. Lehman at 3:34 PM No comments:

Chainsaw Action: Aftermath of the October Snowstorm of 2011 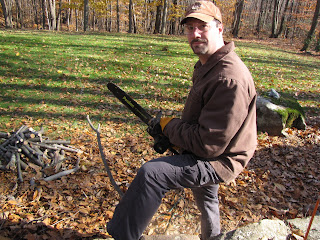 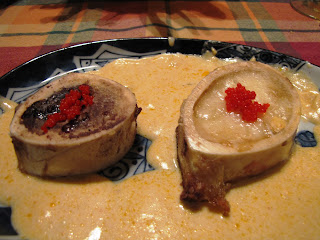 Just a little something we like to whip up once in a while. Roasted beef marrow is always good, and especially spread on toast with  a little salt. But this one in a rich lobster soup (you can see the beading), topped with a teaspoon of caviar (okay, it's not the really expensive black stuff), is almost too decadent. Almost. 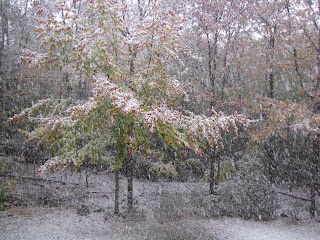 We were in the United Illuminating section of Connecticut, and so we only lost power for three days, but the rest of the state had a tough time of it this year. We have a decent sized property, though, almost all trees, and I've spent the last week clipping, cutting, and sawing the broken beeches and maples. I'm not even close to finished, and my body aches, and so does my heart. Unfortunately, they were the healthiest trees, rather than the old and infirm; the ones with the most leaves suffered most. 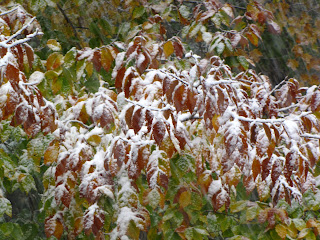 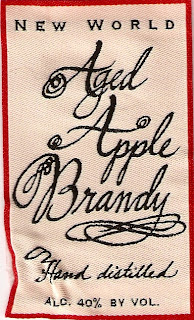 One of the finest brandies in the world, produced right here in Connecticut. Try it out.
Posted by Eric D. Lehman at 5:20 PM No comments: Gouveia Vineyards in Wallingford is one of the prime destinations in the state, and they don't need me telling you so. Every weekend it is jammed with wine aficianados, picnicking at the dozens of tables inside the stone building (an architectural wonder) on top of Whirlwind Hill. If you haven't been there, you're missing out. Even if you don't like wine. 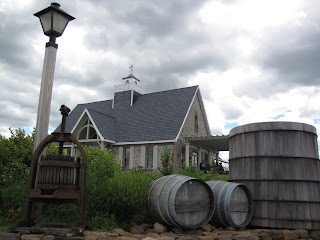 Labels: bridgeport beardsley park eric lehman afoot in connecticut james zoo
Newer Posts Older Posts Home
Subscribe to: Posts (Atom)
I've pointed the direction of this travel blog toward life in Connecticut: its history and its food, its culture and its lifestyle. Join me as I explore the myth of home, something too often lost in our nomadic world.