Jack Kerouac is primarily lauded for his keen understanding of male friendship. The female characters of On the Road or The Dharma Bums never really achieve the reader’s interest the way the males do. But Kerouac is also a writer of exquisitely sad love stories, with complex and fully realized women: The Subterraneans, Maggie Cassidy, and Tristessa. In these tales we find to our surprise that Kerouac was one of the most romantic of American novelists.

The most doomed of these three stories takes place in Mexico City, where Kerouac the narrator finds himself in love with a beautiful girl, an “Azteca, Indian girl with mysterious lidded Billie Holiday eyes.”  The problem with this love affair is that she is addicted to “junk.” In some ways she is like the part of Mexico City that Kerouac experiences: sick, dangerous, and poor. But that appeals to the writer in him, and the potential redeemer. He doesn’t try to convince her to stop taking the drugs, but thinks perhaps his love alone can save her. This is a theme that echoes through the history of literature, profoundly romantic and profoundly foolish in the most tragic way. In Tristessa Kerouac brings that theme roaring into the modern age.

Jack himself, of course, is an addict, and he can understand her pain and joy. He says, “I wail on my cup of hiball so much they see I’m going to get drunk so they all permit me and beseech me to take a shot of morphine.” He does, diving in Tristessa’s paradoxical world. He tells us, “Tristessa is a junky and she goes about it skinny and careferee, where an American would be gloomy.” Then he immediately contradicts this and tells us that she complains all day. This complex girl, both magnet and poison, cannot be fathomed, much less rescued.

After leaving Mexico and living the adventures of The Dharma Bums, Kerouac returns to Tristessa, finding her shacked up with his friend Old Bull, a veteran addict himself. She is sicker than ever, and he knows he is too late to save her. She starts to hate him because he is not a junkey, and he realizes that to love her he would have to become one. There is a third person in the love triangle, but it is not Old Bull, nor the Mexican “cats” so attracted to the waifish girl. No, the third side of the love triangle is morphine. Bull preaches the awful truth to Kerouac: “She don’t want love — You put Grace Kelly in this chair, Muckymuck’s morphine on that chair, Jack, I take the morphine, I no take the Grace Kelly.”

With this knowledge Kerouac leaves Mexico City, destined never to find true love. Was he not brave enough, as he claims? Was he unable to reconcile his romantic ideals with cruel reality? Or was he looking for love where it could not be found? We are left to wonder, and left to mourn, as Kerouac does, the loss of the unfathomable mystery of a young girl named, appropriately, Sorrow.


First published at Empty Mirror Books.
Posted by Eric D. Lehman at 10:31 AM No comments: 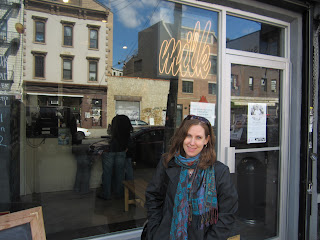 Stopped at the Momofuku Milk Bar in Williamsburgh the other day, and had their pork bun (see below), which was excellent. However, the use of shredded pork instead of pork belly definitely makes a difference. I must say I prefer the original. However, according to the servers, there is no real way to do it with belly, since these little outposts of Momofuku are really just to sell their baked goods, etc. It seems to me to be a problem with this method of franschising out, even if these outposts stay only in NYC. 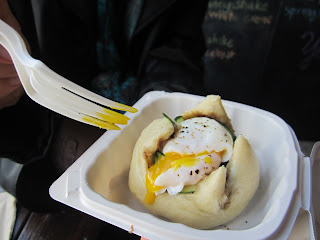 I'm a huge fan of Momofuku (see this article I wrote), and I want to see it expand everywhere. It is delicious, delicious food. But I'm not sure this model is working. Sure, the cookies we had were amazing, and they have all the Christina Tosi baked goods and cereal milk, etc. But I wonder if this will harm the brand by messing with expectations like this.
Posted by Eric D. Lehman at 3:51 PM No comments: 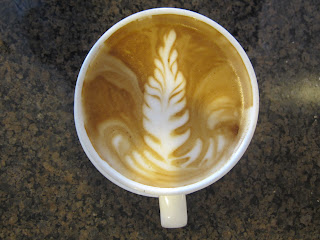 Been to Blue State Coffee in New Haven a couple times now - great coffee and a great place to get some work done, as long as I have my ipod (it's a little loud). 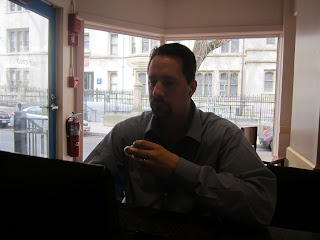 There are a number of these shops throughout New England...just beware if you're a conservative, they do have quotes from a number of liberals on the walls, etc. Thus the name Blue State. 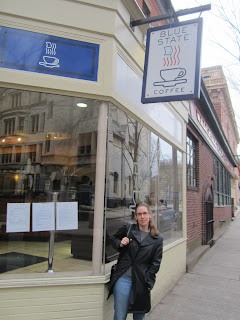 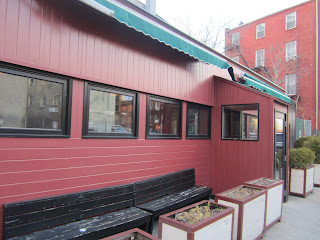 Ventured over the border to Diner in the Williamsburg area of Brooklyn. As you can see, there is no sign outside, and unless you know it exists, you might miss it. 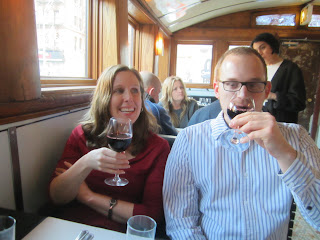 Inside is the shell of a beat-up diner, of course, but the food is all beautifully prepared, fresh, farm-sourced deliciousness. 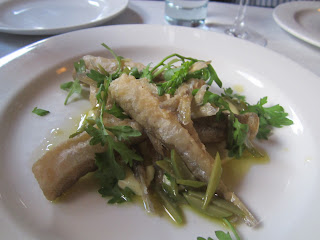 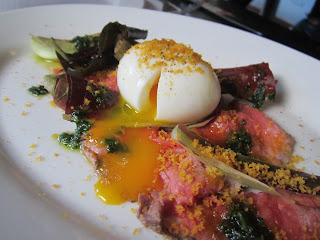 Guinea hen! (You can see how the sun was setting by the darkness in these next photos.) 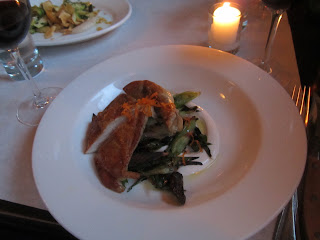 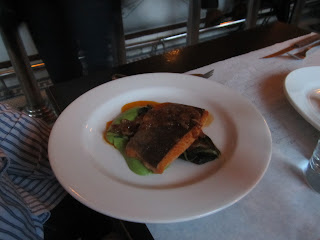 And rabbit legs...not one piece of this wonderful meal let us down - a totally solid meal. 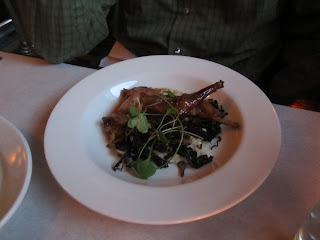 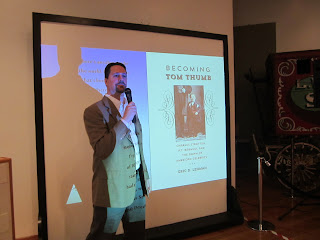 I gave a sneak-peek at my upcoming book and its hero at the Barnum Museum last week. Everyone was quite surprised how popular Tom Thumb was. It seems so obvious to me now, but if I had seen someone else give this presentation five years ago, I probably would have been shocked, too. More to come!
Posted by Eric D. Lehman at 8:21 AM No comments: 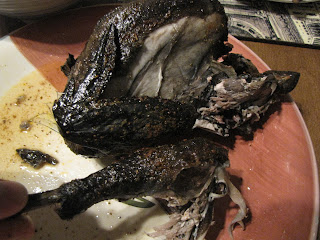 Tried our first Silkie Chicken the other day. Blue skin and flesh...fascinating eating experience. The one we had was a Bantam, I think, because it was small, about the size of a Cornish game hen (bred for the first time here in Connecticut). I quite enjoyed it, though the one we had was clearly a 'wild' bird with very little breast meat. A little Old Bay seasoning, a dipping sauce, and Amy and I ripped into it with gusto. Try it out for yourself!
Posted by Eric D. Lehman at 3:25 PM 1 comment: 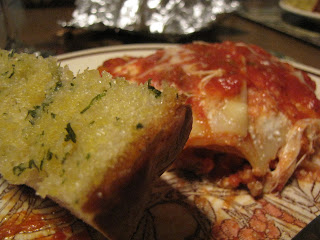 My wife Amy made a delicious lasagna last night, with garlic bread, and to accompany it we picked out a 2003 Segla Margaux. I have never been disappointed with a Margaux, and this was no exception. My wife has a slightly less impressive record - she has disappointed me twice with her cooking. Of course, since she has made thousands of meals, that is a pretty solid batting average. 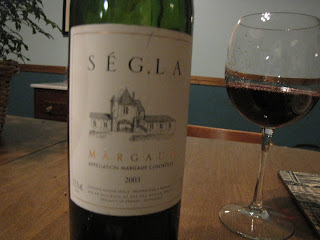 Anyway, a Margaux seems to me to be the perfect French wine for a lasagna, although Italian purists are no doubt having fits when I say that. But some other Bordeaux would be too heavy, I think. What about you?
Posted by Eric D. Lehman at 11:45 AM No comments: 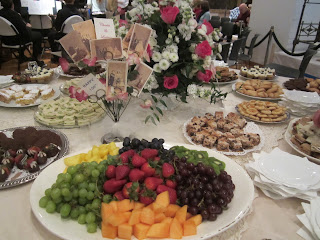 Had a great time at the Barnum Museum's 150th anniversary of the "Fairy Wedding" of Tom Thumb (Charles Stratton) and Lavinia Warren. We had tea, listened to the Weston High School orchestra sing Tom Thumb songs, and listened to a lecture on the fashion impact of Lavinia's wedding dress. 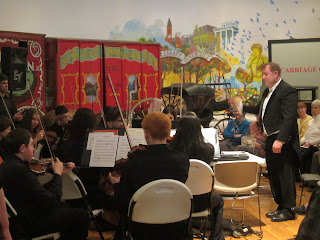 Next up - my own lecture on Tom Thumb's World Travels!
Posted by Eric D. Lehman at 3:20 PM No comments: 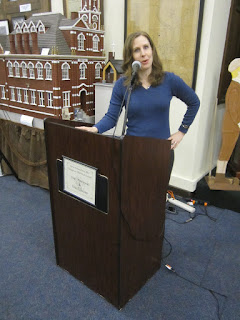 We had a lot of fun at Savor Connecticut again this year - over a hundred people showed up, and we got to taste some of the treasures of Connecticut, from Nardelli's subs to Avery's Soda to Fascia's Chocolates. 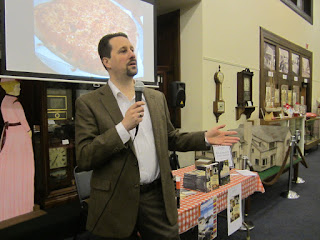 Wendy Murphy at the Naugatuck Historical Society puts it together every year, and does an amazing job. I hope everyone supports their local society - in this case one of the best in the state. 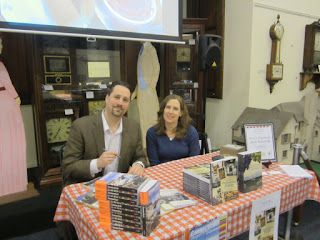 Labels: amy nawrocki, eric d lehman, history of connecticut food, naugatuck historical society, savor connecticut
Newer Posts Older Posts Home
Subscribe to: Posts (Atom)
I've pointed the direction of this travel blog toward life in Connecticut: its history and its food, its culture and its lifestyle. Join me as I explore the myth of home, something too often lost in our nomadic world.