I was a guest of the History Press at NEIBA this year, signing books for interested booksellers. I had a great time talking to my editor, Saunders Robinson, and publicist, Lara Simpson. 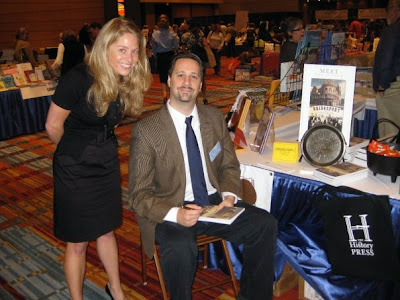 Of course, my greatest happiness is that my book was chosen as one of the five to be on the History Press Banner. Thanks, guys! 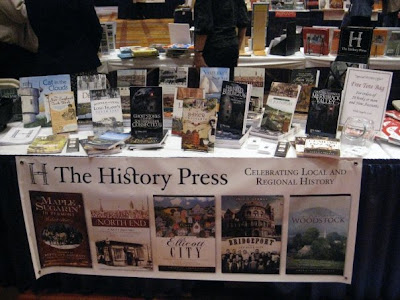 On WPKN yet again!

I was interviewed by phone on WPKN last Friday morning (WPKN Mornings With Doug Echols). They mention my book throughout, but I am interviewed during the last half hour of the 3 hour show, HERE. Amy listened to it and says that I did well, but you better judge for yourself.

They are offering my book, signed to you personally, for a $40 contribution to one of the only truly independent radio stations in the country.
Posted by Eric D. Lehman at 8:21 AM No comments: 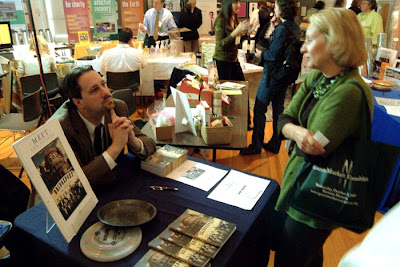 I had a table at the Bridgeport Green Expo last Wednesday from 10-4 at the Barnum Museum. I met some really nice people, including Mayor Finch, who told me he is slowly reading my book a few pages at a time, and likes what he's reading. 9 other people bought my book, and many had it already. Good news!
Posted by Eric D. Lehman at 4:22 PM No comments:

The Birds and the Silence 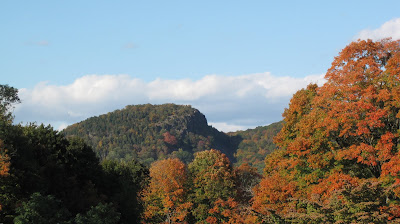 Yet another publication! One of my chapters from Afoot in Connecticut (my as yet unpublished paean to the beauties of natural Nutmeg) has been published in Magnolia: A Florida Journal of Literary and Fine Arts. In fact, my piece is the only prose piece in the journal. Enjoy this reflection on why I (and maybe you) like the high places of the world, even in relatively lowland Connecticut. 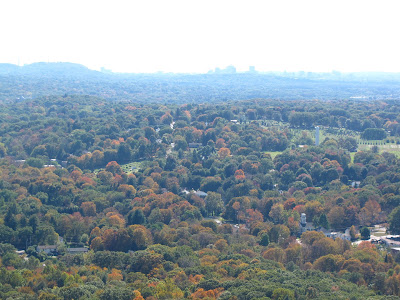 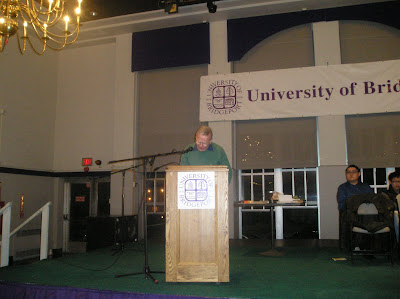 Friday to Saturday we had the 24 hour readathon for the National Endowment for the Arts Big Read. We had it in the Social Room of the Student Center of the University of Bridgeport, and President Neil Salonen kicked off the reading that went on and on and on. 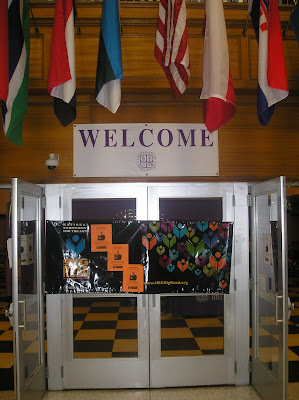 Thanks to Kathy Maher, Rebekah Harriman, Amy Nawrocki, Colin Fricke, Katrina Coakley, Rosemary Landano, and a host of others who came for hours at a time to make this a success. I can't possibly list everyone here - there were almost 300 attendees and over 100 readers. 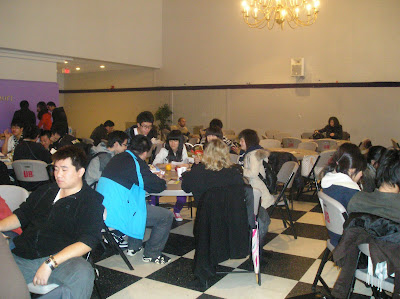 I will have a video of the experience soon, though next year (!) I hope to have it professionally done. 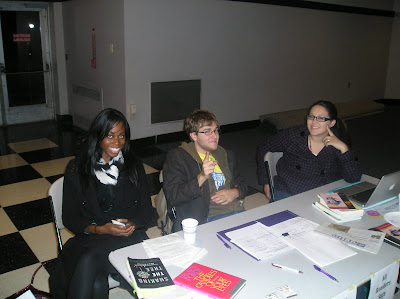 On WPKN with Peter Boshan

I appeared on WPKN this afternoon on All Mixed Up With Peter Boshan (the station manager). I was joined by Kathy Maher of the Barnum Museum, Rebekah Harriman, and the National Endowment for the Arts Director of Literature, David Kipen (by phone). It was an exciting experience, though I didn't get to talk as much as the last time I was on. You can tune into Peter's show here, though I don't appear until about an hour in.

Enjoy, and I hope to see some of you tomorrow at the 24 Hour Readathon!
Posted by Eric D. Lehman at 5:09 PM No comments:

My father read The Magus a few summers ago. He tells me he slowly made his way through the first half and then finished the book in one night, unable to put it down. I was happy about this, since my father is an engineer and not the sort of person to read one of the twentieth century’s best pieces of literature. I’m sure he didn’t get out of it what I did, but he did make the comment "What was true in the book? Nothing." Exactly, dad.

John Fowles’ novels all deal with the problems of imagination and reality and their relation to freedom and responsibility. His characters use their existential freedom responsibly, to walk the fine line between the two and thus give up the metaphor, the unreal, for reality. I "borrow" many of Fowles’ ideas from time to time, not because I think he has the answers, but because I think he has the questions.

Indeed, in most of his work, he doesn’t give answers. The French Lieutenant’s Woman actually has two endings. One explanation for the novel’s alternative endings is that they allow Fowles not to choose between the values of absolute individual freedom, the preservation of the self at whatever price, and the necessary social compromise entailed by that "true freedom" which lies between.

In The Magus, a man named Conchis takes freedom to its biological or physical extreme, and in so doing makes the protagonist, Nicholas, experience the need for conventions that check both rampant freedom and the insidious penitential distortions of remorse. The godgame in The Magus consists of a long series of masques, or lies, in which a final truth slowly becomes revealed. The truth that there is no truth. No limits.

Conchis uses Nicholas’s relationship with his ex-girlfriend, Alison, who Nicholas gives up for the "mystery" of the godgame, as the objective correlative to his lesson. Nicholas’s earlier treatment of Alison becomes a metaphor for this fine line between freedom of the self and the responsibility to not use that freedom to hurt others.

The debate over the paradox between fiction and reality in Fowles’s work seems to be the central focus of scholarly work. Most critics agree that Nicholas Urfe must transcend his dependence on metaphor, on art, before he can appreciate ordinary life. The Unreal, mystery, God, art, all is shown to be contrary to the taking of responsible action within the freedom that Nicholas is given. Fowles writes in The Aristos, "Freedom of will is the highest human good; and it is impossible to have both that freedom and an intervening divinity." Discounting his atheistic arguments, Fowles also says, "Since ‘God’ is unknowable, we cannot dam the spring of basic existential mystery."

In the absence of a god, freedom’s ‘fine line’ is where Fowles locates morality. This principle in The Magus and later The French Lieutenant’s Woman grounds them in the idea that "good" can possibly be accomplished and there is a definite human morality in this balance, and therefore a truth, even if there is no judgment. He writes in The Aristos, "To accept one’s limited freedom, to accept one’s isolation, to accept this responsibility, to learn one’s particular powers, and then with them to humanize the whole: that is best for the situation."

Who knows if my father got any of this out of his summer reading? But he got something out of it, no doubt. Fowles’ writing is accessible to all, whether his philosophy is or not. All of Fowles’ novels, especially The Magus, are on my list for anyone who wants a good read. Anyone who wants to be lied to, cheated, and deceived. Because only through realizing the lies will we have the freedom to really choose.
Posted by Eric D. Lehman at 3:58 PM 3 comments: 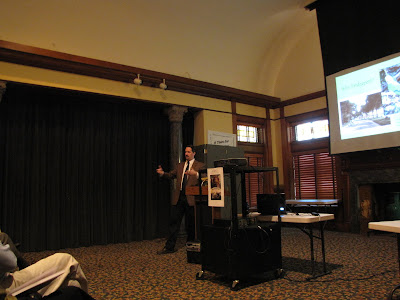 I had a great time giving a presentation to about 25 people at the Stratford Public Library this past Sunday. Some old friends, like J.F. from WPKN, showed up, as well as some new ones, like Diane and Eric. It was a pleasure to talk to Charles Lautier from the library, as well. Next up, the Green Market Exposition on October 21. Of course, I have to run the 24 hour readathon on Oct 16-17 first - no rest for the published. 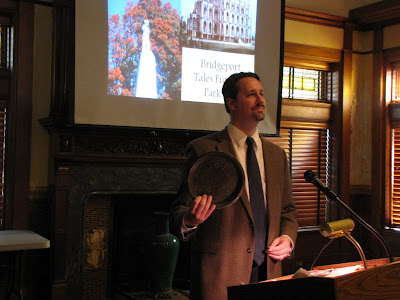 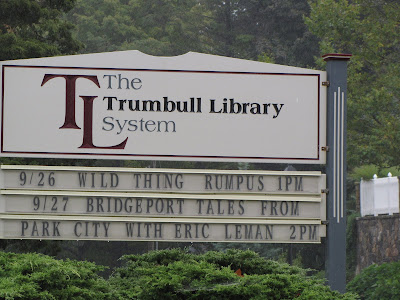 Last weekend (or was it the weekend before?) I gave a presentation at the Trumbull Public Library. I even had some people show up for the second time - I hope they weren't bored. They spelled my name wrong on the sign out front, but otherwise they did a fantastic job of giving me everything I needed. 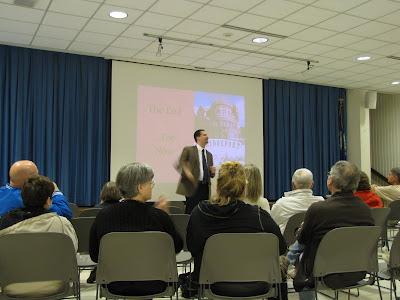 In the last picture I'm talking beforehand with a woman who was 91 years old and remembered watching the animals from the circus' winter quarters roam around the city. Unbelievable! I offered to let her give the lecture. You can also see that they have a videocamera there - I was being filmed for the local TV station, Channel 17. I can't wait to see it! 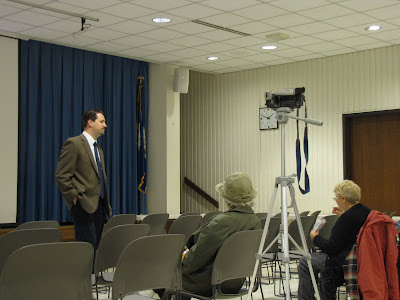 City Lights and the Locomobile 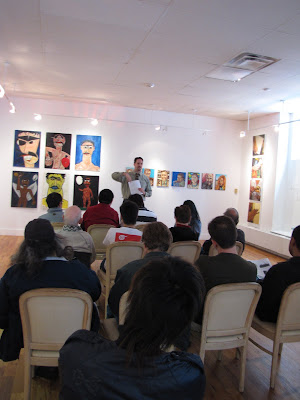 Last weekend I gave a presentation about Locomobile at the City Lights Gallery for the Antique Car Show. It went so well that I panicked I wouldn't have enough books the next day at the Trumbull Library. Luckily, Trumbull was ahead of the game, and had their own books purchased.

The picture below is actually of a "Trumbull" car, so maybe that means something. 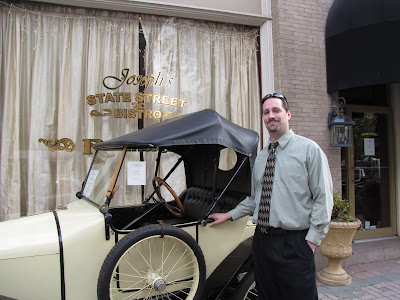 In 1899 the Locomobile began as a steam-powered car. With inventor and electric car manufacturer Andrew Riker’s development of a new gasoline-powered engine for the company, Locomobile was soon one of the most popular cars in the world. The “Number 16” car pictured below won the 1908 Vanderbilt Cup, clocking in at an astonishing 64.38 mph. Locomobile was called the “best built car in America.”

The Bridgeport, CT factory stood on the west side of the harbor, where oil drums stand today. As pictured in the postcard to the right, the factory lay in sight of the famous Seaside Park, and Locomobile cars were often taken for fast drives on gravel pathways that had been designed for stately horse drawn carriages. 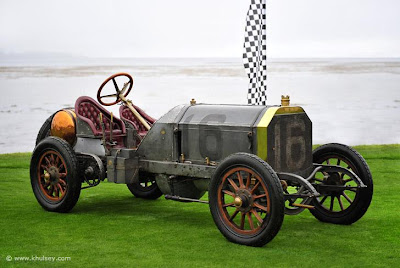 The Locomobile had the distinction of being the first car not designed to look like a ‘horse and buggy.’ Andrew Carnegie and Charlie Chaplin took pride in owning one. During World War I, the company sold the Riker Truck to the British army, contributing more vehicles to the war than any other American company.

The brand became a watchword for quality automobiles, catering toward a luxury market. Tiffany and Company even supplied the cars’ silver fittings. However, with the increasing use of autos by the general populace, and the cheap, accessible cars now produced by Ford Motor Company and GM, Locomobile began to lose importance and customers. The Great Depression sounded the final death knell for this fabled Bridgeport car company.
Posted by Eric D. Lehman at 8:03 AM No comments:

Labels: city lights gallery presentation locomobile
Newer Posts Older Posts Home
Subscribe to: Posts (Atom)
I've pointed the direction of this travel blog toward life in Connecticut: its history and its food, its culture and its lifestyle. Join me as I explore the myth of home, something too often lost in our nomadic world.