As you can see, the author's 'round table' I participated in at Fairfield Borders Bookstore was neither round nor table. In reality, it was a gathering of authors, designed to bring out the maximum number of fans. The ploy worked, since many people came out to see (probably) Marie Bostwick, Litchfield author and New York Times bestseller. But they left buying my book, too. 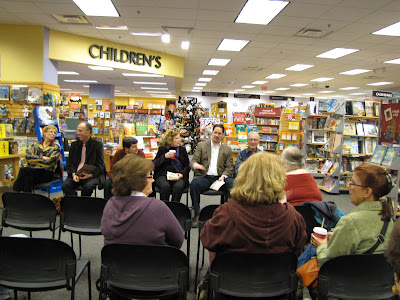 I had a great little discussion with all the authors there, and particulary with a British expat who had flown with the RAF in World War II. His name currently escapes me, but I'll remember it when I get his signed book for Xmas. 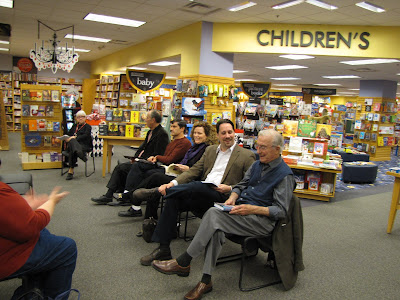 Thanks to all who attended! This was my last "public" appearance this autumn, though I also just appeared on Bridgeport Now, and will be doing several 'private' appearances for local groups coming up in December and January. By then the Hamden book may be finished and the next round will soon begin. The author's life is a busy life.
Posted by Eric D. Lehman at 10:45 AM 2 comments:

The Ghosts of Remington Arms 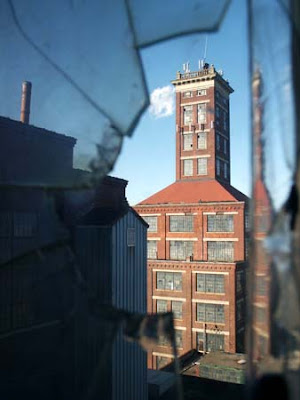 I'm not a huge fan of Ghost investigation programs. However, this week's episode of Ghost Adventures is at the Remington Arms. Check it out Friday at 9 pm on the Travel Channel!
Posted by Eric D. Lehman at 5:32 PM 1 comment: 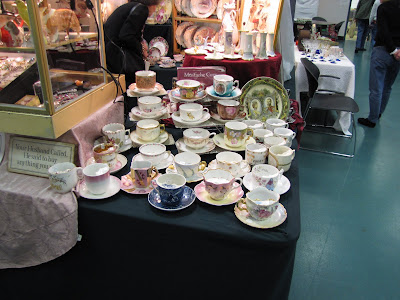 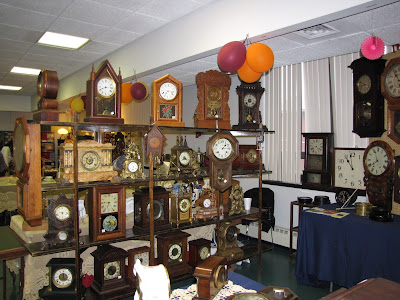 Amy and I volunteered to work the kitchen last Saturday for the Hamden Historical Society Antiques Show. We had a lot of fun and hope to do it every year.
Posted by Eric D. Lehman at 2:36 PM No comments:

Okay, I try not to simply post everything I see on the web. I watch these TED lectures all the time and see wonderful stuff happening in both the world of ideas and the world of invention. But this is "jaw-dropping" new technology, developed by a 28 year old grad student at MIT named Pranav Mistry. Earlier he developed intelligent sticky notes, etc. There is an April lecture by his MIT professor, as well, which highlights some of the stuff. But this new one is better.

The embed function isn't up yet, so click here to be taken to the TED site.

This invention/development could be the next revolution, akin to the personal computer revolution or the internet. I'm completely blown away. What is most amazing to me is that all the component parts make sense to me, but I never would have thought to put them together (nor would have had the technical skill to pull it off, obviously). This is the heart of invention. When Eli Whitney began the American Industrial Revolution here in Hamden, Connecticut, he was merely building on what others were doing, and taking what others had done and applying that in a new way.

What can YOU see that others cannot?
Posted by Eric D. Lehman at 6:15 PM No comments:

Or Babovka, or Bovka or however it is spelled in your language. Here it is explained by Amy Nawrocki at her poetry reading, "Fishing Rods, Kitchens, and Vincent Van Gogh."

Published in The Port

The Port is a new web-zine, as they used to call them, focusing on the fair city of Bridgeport. Eva Liptak is the primary editor, and her mission is just - to improve the cultural scene here. So, of course I contributed. You can read my story here. 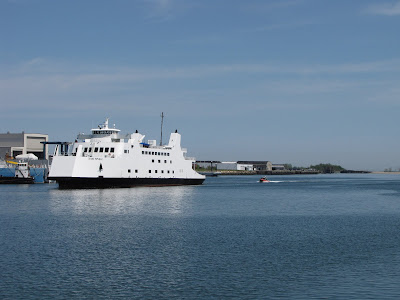 My lovely wife also contributed a poem about Seaside Park.
Posted by Eric D. Lehman at 7:54 AM No comments:

A couple years back I was interviewed by the now defunct Grand Rapids Literary Review. Some of my answers would be a bit different now I think. Nevertheless, below is the fruit of that encounter.

GRLR: Tell us about “making a life as a writer.”

EDL: Well, like everyone else, I started out believing I was a writer just because I thought about it a lot, scribbled a few bad poems, and had some fancy critical opinions. But it really hasn’t been until the last few years that I have become an enormous funnel through which my personal life, my reading, my teaching, and everything else flows in, and writing flows out. When a story or poem or essay is published, I become an “author” – and possibly in the future will make a “living” as a writer. However, that’s only a bonus.

GRLR: Do you have any books out right now? IF so, how do you feel about them? If not, are there plans for a book in the future?

EDL: I have completed work on four books, and one of them is being seriously considered at a publishing house right now. It is called Afoot in Connecticut, and is a non-fiction narrative about hiking in my adopted state. It is also probably my favorite of the completed work, though I’m working on two more right now that I might eventually like better, a historical novel and a travel book about wine-tasting.

GRLR: How do you balance teaching with your own writing?

EDL: That’s a constant problem. Teaching is in some ways the perfect career for a writer, because of the constant input it provides. However, I usually teach extra classes, up to twice the normal professorial load per year. This obviously cuts into writing time. I still manage to have a strong level of output (according to my other writer friends), but only because I am somehow able to steal segments of writing time throughout my day. I think that doing this is a matter of commitment to the practice and craft of writing, but I have been told that it is actually “insane.”

GRLR: What would you tell to others who want to devote their lives to literature?

EDL: I think that everyone’s life should be involved with literature, with telling and listening to stories, with the wonderful dialogue of writers and thinkers that goes on around us, but then again I’m a teacher. To really devote oneself, though, in the way that people are “devoted” to Elvis, is something I recommend only for the few. You must read, read, and read some more. But devotion is not only input. You must create conversation by sending your thoughts out into the world.

GRLR: What has been the most satisfying moment of your writing career?

EDL: That’s an easy one. A student in Saskatchewan emailed me and told me that she was doing an essay on one of my poems, and if I could please send her a little about myself to use in her introduction. I had received feedback before, but this was different. Someone was not only responding to my poem, but talking about it. Suddenly I realized that my work was “out there” and had become part of the great story.

GRLR: If you were on Death Row, and could have one last meal, what would it be?

EDL: This question made my tastebuds argue with each other. I thought about a basket of my teenage favorite, buffalo wings, since the indigestion wouldn’t matter, would it? But there was a large tastebud contingent that argued for a more high-end meal, with a glass of Rothschild wine and some sort of roast duck. I suppose that death brings out the carnivore in me. In a vegetarian world, I would go for some homemade macaroni and cheese and roast leeks.
Posted by Eric D. Lehman at 2:29 PM 2 comments:

Anniversary in the Gunks 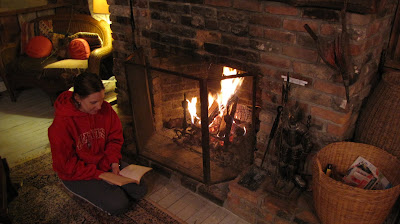 Ah, sweet relaxation! So seldom dost thou visit me!
Posted by Eric D. Lehman at 8:03 AM No comments:

Labels: shawangunks anniversary
Newer Posts Older Posts Home
Subscribe to: Posts (Atom)
I've pointed the direction of this travel blog toward life in Connecticut: its history and its food, its culture and its lifestyle. Join me as I explore the myth of home, something too often lost in our nomadic world.