Splitting Wood with a Wedge 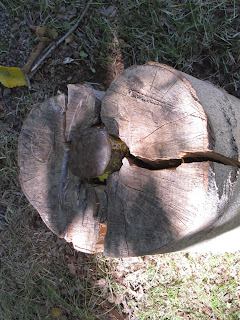 Used a maul and my grandfather's wedge yesterday for the first time. We had a bunch of beech tree sections that are just a little too big for the wood stove, and I finally got around to trying out the splitter. It worked great. 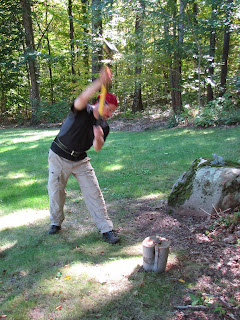 Of course, it took me a while to get used to the motion, swinging down from the top only to save energy, while sliding my right hand down the shaft and bending my legs down to prevent backswing and hit the wedge from a nearly horizontal position. (I'm too tall to get it to work as well as some could.) 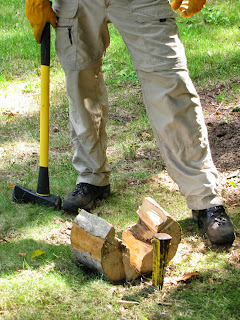 But I got used to it, and began hitting the wedge correctly more often (not every time!) and hearing that wonderful bell-like sound when the maul and the wedge connect perfectly. Many times the wedge ended up driven into the ground, as in the photo above. 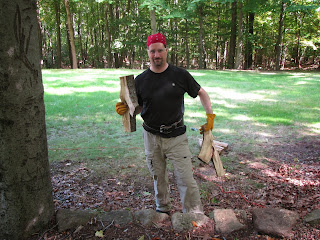 I even tried it with some non-round pieces of wood and it worked fairly well there, too. It was a good day. The transformation of knowledge into practice is always satisfying.
Posted by Eric D. Lehman at 7:41 AM 4 comments: 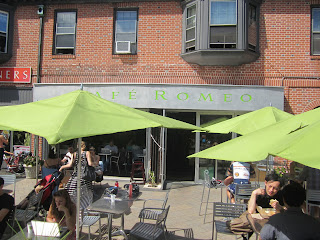 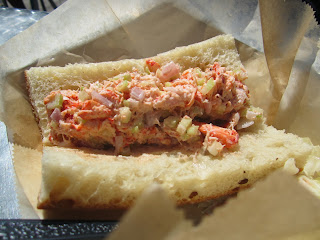 Biked into New Haven and had lunch at Café Romeo on Orange Street. Delicious selection of lunch foods, coffee, and good service. We'll be back! 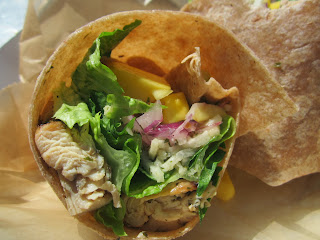 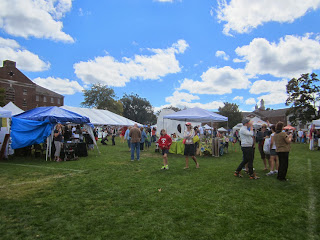 Amy and I were honored to speak at the Newtown Arts Festival this year. It was a special year there after the tragedy last winter, and it was twice as big as last year. We gave a presentation on A History of Connecticut Food, and had great attendance. Next year they might sell our book(s) at the main tent! 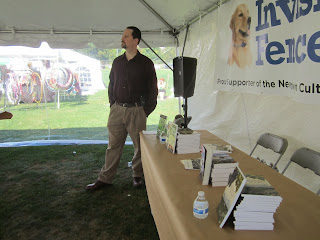 Check out my latest short story in the Fall 2013 edition of ken*again. I also have a couple of poems in this issue, which you can find here.
Posted by Eric D. Lehman at 9:39 AM No comments: 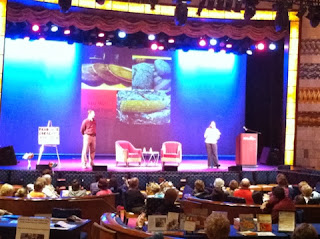 It was an honor to present at the Mohegan Sun Cabaret on Thursday night for the Connecticut Author's Trail. Everyone was excited to hear all about Connecticut's great food and wine! 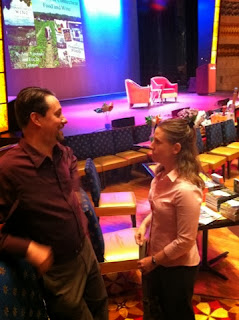 On the Connecticut Food and Farm Podcast 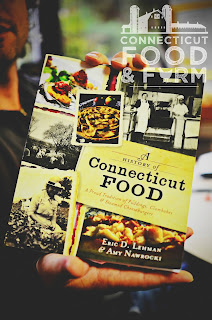 We had the pleasure of talking to Winter Caplanson of Connecticut Food and Farm last week. Click here to go to their page and listen.
Posted by Eric D. Lehman at 4:04 PM 2 comments: 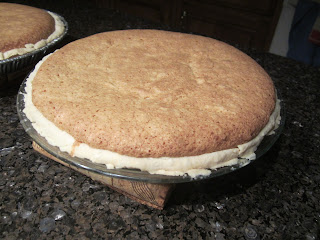 My wife made me for the first time, the Pennsylvania Dutch treat of "funny cake." It is something I had often throughout my childhood and loved dearly, as one loves an old friend long gone. Now it is back in my life again, and my grandmother Jeanette's recipe has stood the test of time. 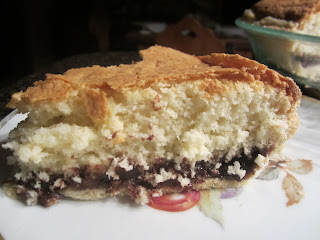 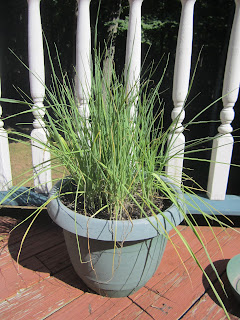 My wife planted leeks in a pot on our porch (if we put it in the yard the deer will get it). The other day we harvested them and, using stock and milk, softened them, and ate them.﻿
﻿ 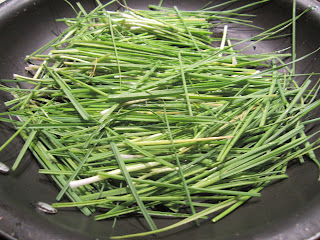 A little pepper and salt is all it needs. So yummy. 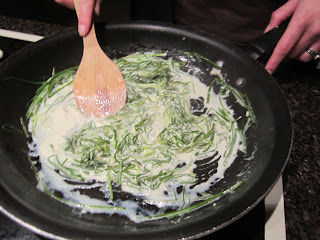 Review of The Great Gatsby and On the Road

This will be a short review, but it is something I have not read elsewhere. And as a writer myself, I think I can make this statement with the proper ethos.

There is nothing more boring than a film about someone becoming a writer.

That's right. I can think of exceptions of course - Henry and June, Out of Africa. But the worst part of the past year's two "literary" films was the fact that the narrator is "writing" the book, and we have scenes where the narrator "becomes" an author. Just awful. Unnecessary. And worst of all, not accurate.

I am no purist - I love a film adaptation. The Lord of the Rings was for many years my favorite book, and I had no problems with the many changes made there. In fact, I understand completely the need to change the plots and details of books for the film medium. This is not an argument about purity, because neither of these films is too far from the book. In fact, the only part that is really inaccurate is that both filmmakers decided to make the main character a "writer." Worse than inaccuracy though, is the way it changes the story for the reader, demeans it, lessens it, makes it a reflexive story about writing, the most boring kind of story of all.

In the case of On the Road, this is somewhat accurate. Sal Paradise is, in fact, a writer, obviously based on or embodying Kerouac himself. But his "writing" is ancillary, and not important to the book's story. The key moment comes in the book and the film, at the end, when Sal rejects Dean Moriarty on a cold New York street. That is wonderfully included in the film and superbly acted by the two leads. But its emotional power is sapped by the fact that Sal is shown "writing" this scene, destroying the dramatic intensity. The director gets the film right in many respects - this is a story about men, a whole country in fact, without fathers. But the film is also, mostly, about becoming a writer. It lessens the impact, and was not the point of Kerouac's work. It is the point of far too many directors who adapt books who, because they are books, think they need to make the films about books.

In the case of The Great Gatsby, the director, or perhaps the script writer, clearly wants to show off how well he understands the book. Every theme is explained ad infinitum. This making explicit of the symbolic and metaphoric is only irritating for those who do know the book, and worse for those who are discovering it through the film. There is nothing for them to discover - there is only the surface - the implied dumbed down to the obvious. And worse, bizarrely, though there is no mention of Nick Carraway becoming a writer in the book, the director has chosen to make him become a writer, to "write" the story of the film. Thus, the film is doubly "literary" and doubly boring because of it.

It is the story that matters, not the fact that it is a written story originally in a novel form. Most book adaptations are terrible not because the books cannot be adapted, but because some directors cannot forget that they are books.
Posted by Eric D. Lehman at 4:53 PM No comments: 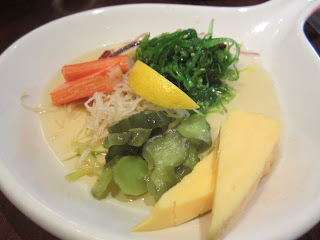 Stopped by Yamadora, in East Haven, Connecticut, the other day for a dinner of pork belly, bulgogi, and the usual accompaniments. Delicious, but we ate too much. 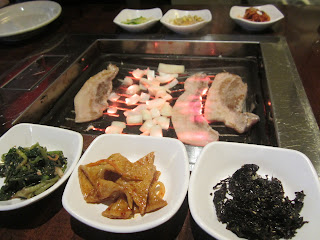 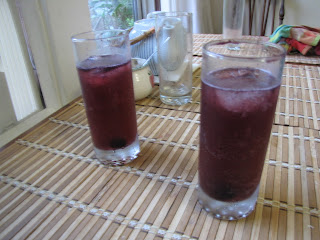 Hake in Beurre Blanc Over Spinach 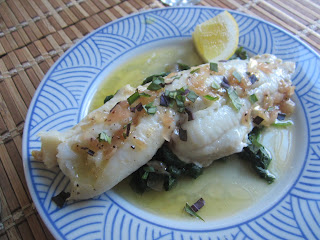 Labels: beurre blanc, hake, spinach
Newer Posts Older Posts Home
Subscribe to: Posts (Atom)
I've pointed the direction of this travel blog toward life in Connecticut: its history and its food, its culture and its lifestyle. Join me as I explore the myth of home, something too often lost in our nomadic world.