Campsite at the Edge of the Real

Camping had always been a means to an end for me, a way to get close enough to the wild to facilitate sightseeing and hiking, a way to escape the secular reality of everyday. But that all changed the day Ryan, Jenifer, and I set our tent at the northern tip of Cape Breton Island. 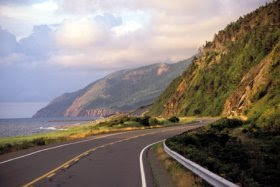 Our first night on the peninsula had been a disaster, a tremendous summer storm forcing us out of the woods, only to find that every single motel along the Trans-Canada Highway had been booked solid. Finally, we had spent a short and miserable night in the last available room in the province. The next morning we drove over the causeway and into a different world.

The island seemed untouched by the twentieth century. Victorian houses and pastured farms gave way to tiny fishing villages and log cabins. The three of us twisted along the Cabot Trail, over the boggy plateau and back down to the coast. We turned off on a gravel road and stopped at an isolated Buddhist monastery for a spiritual interlude, communing with the blustery offshore wind and carefully tended garden paths. And then we turned back into the highlands, stopping suddenly as a black bear cub crossed the mountain road. The mother bear hesitated by the guard rail, peering at us. We stopped a car behind us, but travelers kept whizzing by in the other direction, preventing the bear from joining her offspring. Finally, giving up, we continued on, staring into the huge animal’s eyes as we passed a few feet away. We had entered another realm, but instead of the feel of magic, of unreality, this land seemed more natural and tangible than the one we had left behind.

Near the tip of the hand-shaped island, we turned off the Cabot Trail onto a dirt road, bouncing onto a long verdant finger of rock. Bays hemmed us in from both sides as we crawled farther into the boreal hinterland. At last, we found a place to camp, parking by a pine forest on the edge of a long grassy sward that dove down towards the crashing sea. Across the bay to the west, a long forested ridge jutted out into the North Atlantic, pointing towards the unseen crag of Newfoundland. The waves rumbled and echoed far below, giving the impression that all islands give, of being on the very edge of the blue-green globe.

Jenifer carefully set up the tent and prepared our beds, while Ryan and I cooked a lavish dinner under a covey of circling hawks. The sun began to set over the western ridge as we filled our bodies with yellow squash soup, red spicy pasta, and chocolate pudding. As dusk settled over the empty land, I wandered out into the meadow, which ended in a row of stumpy pine trees at the top of a rocky cliff. The tide had gone out and long silver strands of beach nudged into the bay. I strained my vision, trying to spot seabirds far below. Instead, two pairs of gleaming eyes jolted into mine from only twenty feet away. Two large red foxes, looking as if they were half-coyote, stared at me curiously. I smiled and backed up, making my way back to the green dome of the tent, where Ryan and Jenifer were preparing for bed. "Foxes!" I grinned, pointing. And then there were more, flitting along the edges of the meadow, darting in and out of the pines. I had thought foxes to be solitary animals; these were clearly not. But all I could think of was how right this was, how much more natural their community seemed. Perhaps, like us, the solitary foxes of my New England home were driven to that state by our crowded city-world. 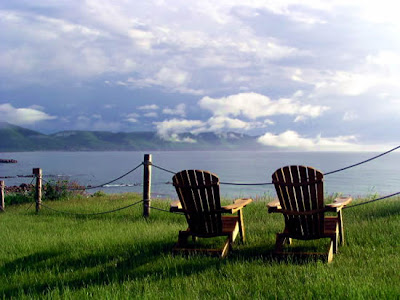 After we had settled in for the night, I exited the tent to eliminate some of the lime tea I had enjoyed earlier. The lush meadow was brilliantly lit and I looked up, expecting to find a full moon. But the night was moonless and instead a billion stars shouted down their joy from the sky. The Milky Way, a long, thick river of light, split the primitive heavens in two. I could see a line of blue plane-lights, leaving the east coast of the United States and heading in a long arc over Newfoundland to Europe. One, two…ten planes stretched out over the full bowl of sky. I spotted red satellites moving west across the ancient starfield slowly, sentinels of technology and civilization. I was looking into another sphere, one that I had left behind, but could only see the intense beauty of it all, as if the worlds of long ago and the future had melded on one great benevolent canvas.

I woke Ryan and dragged him out of his sleeping bag. He gasped in astonishment at the absolute clarity of the sky-world above us. "I’ve never seen the stars before," he muttered. And I knew what he meant, that this finally was the reality of the night, that we had only lived in a hazy dream before now. Finally, exhausted by a long day full of marvels, we stumbled back to our peaceful green home, drifting off into a satisfied void.

The next morning, we kayaked across the more sheltered bay to the east of our bivouac site. Ryan told us how he had woken before dawn and watched the sunrise, then with a thrill, watched the pack of foxes dancing and playing in the orange morning light. Below us, in the cold northern water, a bizarre assembly of millions of luminescent jellyfish drifted and swayed. We paddled lightly across this creepy dark soup, and I finally had a sensation of unreality, as if I was upside down, paddling across the night sky, as if each white jellyfish was a gleaming star, and that last night’s camp was the only true taste of reality I would ever find.


First published in Hackwriters: The International Writers Journal. (In fact, it won an award.)
Posted by Eric D. Lehman at 1:33 PM

North Cove! Foxes! What a great surprise to find these memories this morning.

Amy and I almost decided to stay at the Inn in Sackville where we spent the last night. But it didn't work with our route quite right...